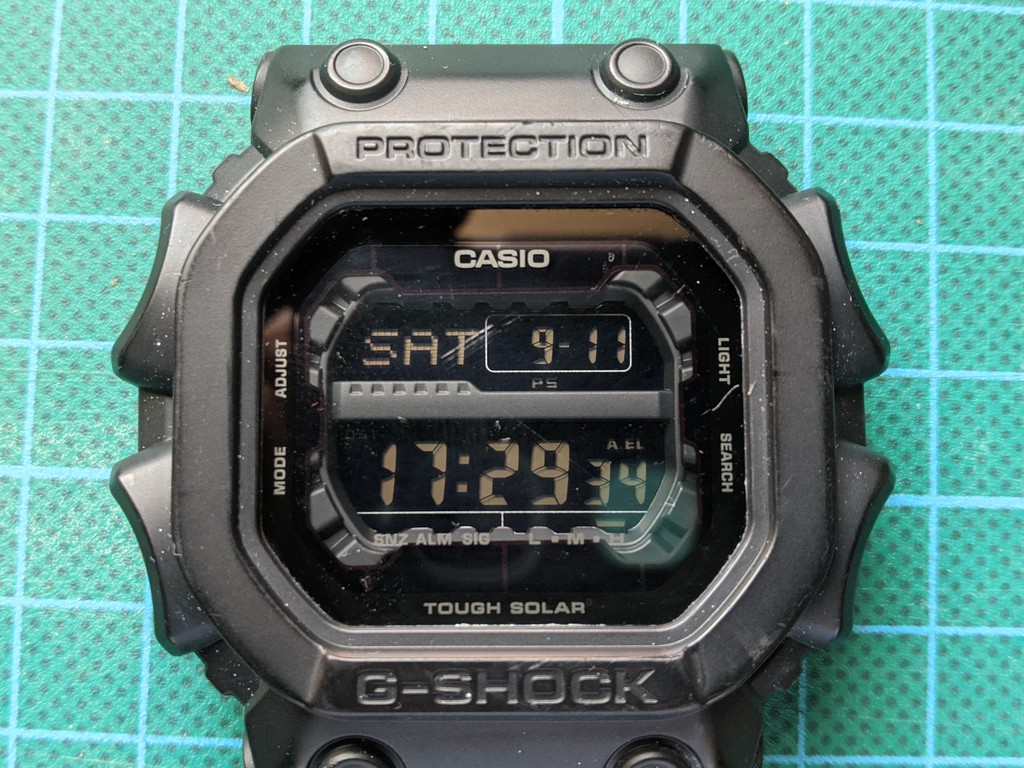 Today we will see a very simple mod that improves the visibility of the screen of the Casio GX-56BB, inverted model "The King".

One of Casio's flagship models is this GX-56BB, better known by fans as "The King", due to its exceptional protection system that makes it almost impregnable and its large size.

You can see a much more detailed review in this video from the "G-Shock en Español" channel.:

The problem to see the time

It's really a problem of mine, but I have a hard time seeing the time on all inverted watches. Except for a Casio GD-350, a model that looks really good, I think I have "uninverted" all the inverted models I owned.

I know that to some purists it may seem an atrocity, but from my point of view, the primary function of a watch is to see the time. And it was nothing like having to keep turning to look for more light or turning on the display light to see it clearly.

The process is simple, as we explained in the Guide to invert the screen, we only have to change the orientation of the polarizing filter that is glued to the lcd. Although the operation is simple, we must disassemble the watch, extracting the module and disassembling it to be able to manipulate the screen without problems.

But let's look at the process in more detail, which will allow us to observe the magnificent construction of this Casio model and its different layers of protection.

The first thing to do is to have the necessary materials at hand:

The first step is to remove the straps to be able to manipulate the watch more comfortably. We loosen the lateral screws that fix them to the watch case.

Next we will have to remove the bezel. We will remove it carefully so as not to deform the axes of the buttons or damage the bezel, leaving the watch case like this:

We see how dirt has accumulated under the bezel, we will take the opportunity and that the watch still maintains the tightness to clean both and leave the watch spotless (do not do as I did that I got mixed up and had to clean it later).

Once everything is clean, we turn the watch and begin to disassemble the back. We remove the 4 screws of the back with the screwdriver jis and carefully to avoid damaging the thread in the resin of the case.

We remove the back cover together with the external protector that goes over the back cover. We can see the inside of the case and we begin to realize that the level of protection of this model is well above most of the G-Shock models.

Disassembly of the module

We extract the module from the box, and we must start to disassemble it. Here we must be very careful, since the module internally includes several springs, especially 2 very small ones that we run the risk of losing them.

Basically there are 4 springs in the module:

We remove the 2 springs that join the solar plate of the box with the module and we keep them in a safe place to avoid losing them.

Now we will proceed to remove the LCD screen from its support. We will have to remove the plastic hatch that hold together the electroluminescent screen, a transparent sheet and finally the screen itself.

Next, we separate the transparent sheet and remove the lcd screen very carefully, we don't want to break it in the process.

As we can see, the screen has the polarizing filter glued on it, which gives it its characteristic black background color with "white" digits.

This is the most delicate process. The polarizing filter is glued to the screen, so we must separate it carefully.

This is what the screen looks like once the polarizer has been removed. We must clean the remains of glue carefully, rubbing gently with alcohol.

Once we have cleaned the glue from the screen, we proceed to reassemble the module, as we must know the exact orientation of the polarizer to see the time correctly.

Now we only have to place the accumulator and once the clock is working (although we do not see the digits on the screen), we place the polarizer on it. We will be able to see the effect and to turn it to leave the positive screen. It is very important to know which side of the polarizer is the adhesive to place it correctly.

Once we know the orientation, we only have to cut the polarizer using the old polarizer as a guide and so it has the exact size.

We check that there is no glue residue, dust or stain on the screen, remove the protective plastics and stick the new polarizer on the screen.

Now all that remains is to insert the module back into the watch case.

An essential step is to reset the module, since in the process we remove the accumulator. With the tweezers, we join the point marked with AC and the metal casing (which is marked with the symbol - ).

We take the opportunity to apply silicone grease to the rear gasket and place the rear rubber protection. We check the operation of the buttons, place the back cover together with the back protector and screw it on.

When screwing it is convenient to do it crosswise while we hold the cover against the case of the watch and the screws do not tighten them to butt at first. When we have the 4 screws in place and almost tightened, we give the final tightening without overdoing it, that we can load the thread of the case.

Lastly, we can see the change in the king, which is spectacular. Now it is much easier for me to read the time at a glance, and I will begin to enjoy this magnificent G-Shock much more.

Is it worth it?

If you have been bitten by the bug with this wonderful GShock model, you have to take into account its size. If you have a small wrist, it may be too big for you.

On the other hand, it is a very comfortable watch, one of the most comfortable I have, with excellent protection against shocks with its alpha-gel and automatic illumination. Combined with its solar power system, we will forget about battery changes for many years.

If you like tactical watches, this is a great candidate (both for features and dimensions).