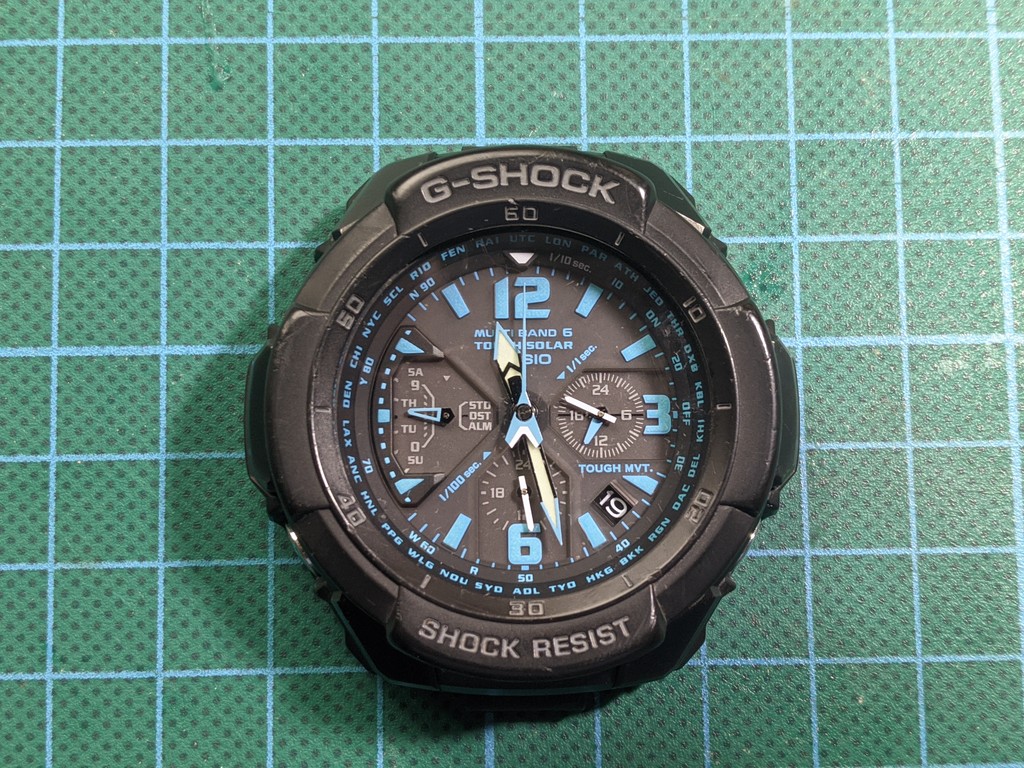 Upon receipt of the watch, as always, I make a "damage report" to detect the problems of the watch and its possible solution.
The most obvious of all is that it did not work , the clock was dead. In addition to that, in the closure of the bracelet, it had a half-broken pin , so there was a high risk that at the most unexpected moment it would end up breaking, and the watch falling to the ground.

More than the classic dirt, it had dirt everywhere. With a couple of turns in the ultrasound machine it will be like new.

The first objective is to check that the watch reallyIt works for you. As it is a solar model, I assumed that the problem was going to be the typical one: accumulating discharged due to being stored in a drawer for a long time.

I leave it next to a window, where it receives indirect sunlight for several hours, waiting for the battery to recharge enough for the second hand to start ticking. Any. After several hours, the watch still does not work , so you will have to open the watch and check its interior.

The back cover is attached to the case using the typical 4 Casio screws. But, and here comes another problem, I notice that one of the screws has no head. It is broken , so it does not put enough pressure on the cover and can cause water to end up getting inside the watch.

Unfortunately, and as long as Casio does not deign to offer watches in which the screws are threaded into sockets embedded in the cases, this will be a recurring problem . This, and the wear of the thread where we screwed the back cover screws.

This problem is one of the ones that annoys me the most, since normally, the screw breaks so that it is flush with the case, so it is very complicated to unscrew it.

In any case, I remove the remaining 3 screws and since this does not prevent removing the cover, we access the clock module, we will repair the screw later.

As we can see in the following photo, the screw on the bottom right has no head. It has a good deal of dirt and some nice fingerprints on the metal part of the movement. We can also verify that the spring that makes contact with the piezoelectric speaker on the back cover is missing.

The problem with the battery

As soon as I open the watch box, I realize where the problem is. The battery is not the right one. In this case, the previous owner replaced the CTL920 battery (3V) with an equivalent size button cell (LR927). The problem is that these button cells are 1.5V, so the watch could not work.

After changing the battery for the indicated accumulator, I leave it for a few hours next to a window receiving indirect light to see if it starts to work or if the module has more damage.

After a couple of hours, I check that the second hand of the watch is already moving.... GOOD!!!

Cleaning of the case and bracelet

The truth is that it is a little disgusting the amount of dirt that accumulates, both in the leather of the case, bezel and on the armis. So the next step will be to remove the module and perform a deep cleaning in the ultrasonic machine giving it several cleaning cycles.

Once several cleaning cycles have been carried out, and the bacteriological risk suit has been removed, we can proceed with the repair of this magnificent model.

Removal of the broken screw

Undoubtedly, this part is the most complicated, because if it is not done perfectly, it could compromise the waterproofing of the watch. As the screw has been headless at the same level as the case, it is very difficult to try to remove it with some kind of pliers. Another option would be to use a screw extractor, but given the small section of the screw and that it is impossible for me to buy one of the correct size, I rule it out.

What I will do will be with a drill bit to go around the body of the screw the box, being very careful not to touch the recess of the box for the rear gasket. It is a tedious operation and you have to go very little by little to try to damage as little as possible the case.

We go very calmly and little by little deepening in the body of the box the hole around the screw.

Once the screw has been removed, the box must be rebuilt. At this point we can opt for two different solutions:

In the end I opted for the latter. The procedure is very simple: knead the same amount of both components until it acquires a uniform color. Apply a small amount in the hole, trying not to leave any unfilled holes.

The next step is to leave as decent as possible the milliput applied. The most important thing is that it is just flush with the level of the case, because if not, water could enter the inside of the watch.

Another advantage of the milliput is that it does not shrink when drying, so we will not have problems once it dries. We leave the milliput flush with the case, and with a brush and a little water we pass it over the putty, which will make it have a much smoother finish.

We also take care of the recess where the rear gasket will go, as we must give it the right shape so that the gasket is not deformed and possible sealing problems.

Next, we must let the putty dry. To avoid problems, the method I have used is to leave the box for 24 hours on the router to the heat to cure the mixture well.

After a day, the putty is completely dry, and we can proceed to rebuild the thread of the box.

The first step is to measure the diameter of the coarse of the screws of the back cover, it happens to know what size of drill we must choose. As we can see, the screws have a diameter of 1.30 millimeters, so we must use a drill bit of a smaller diameter, otherwise, the screw will not thread well.

To avoid problems, we place the box on a support to avoid movement and with a little bit of radic we fix it to the mat. Choose the right diameter drill bit, and with the dremel as perpendicular as possible to the box, start drilling the hole for the screw.

Once we have made the hole, we only have to clean the inside of the watch case, grease the rear gasket, place the module inside and the robe. Ah, and essential, place the spring for the sound (yes, I know it is placed upside down, but it makes the same contact and I avoid having to disassemble half the module).

Before closing the watch completely, we checked that the buttons work, and with the back cover unscrewed, the sound also works without problems.

Taking advantage of the fact that we are in the middle of the work, we disassembled the front of the watch, that seen the accumulation of dirt that it had on the back, there will be enough to clean. Unfortunately I don't have the photos of the bezel disassembly process, big failure 🙁

Here we can see the case and the different pieces that make up the bezel. Compared to other models, we can see that it is quite complex, combining layers of metal parts with rubber parts.

In the following picture we can see the dial in more detail.

We place the first piece of rubber that make up the bezel of the watch.

Then the other metal piece that overlaps the previous one to give greater protection to the watch case against shocks.

Finally, we place the rubber bezel, and screw the two lateral screws that fix it to the case.

In the end, after a few days the pin of the armis clasp broke, so while I was looking for a solution, to be able to continue using the watch, I bought a replacement rubber strap. It is not the original one for this model (the GW-3000BD was sold only with the metal strap), but it makes the watch lighter on the wrist and therefore even more comfortable.

This model, the Casio GW-3000 is a model that has pleasantly surprised me. Very comfortable on the wrist, it almost feels like you are not wearing a watch even if it doesn't look like it because of the dimensions of the case.

With the solar power supply, we ensure not having to change the battery for 10 or more years as long as it receives sunlight from time to time. Another remarkable aspect is how well the Multiband 6 radio control system works, it is rare the day that does not receive the signal and adjusts its time automatically.

Thanks to the Though Movement system, the position of the hands is automatically adjusted every hour. In the event of a shock and misalignment, it is corrected without having to do anything.

Seiko SKJ003: a kinetic brought back to life

Citizen AS4020: changing the battery

Boldr Venture: second hand does not match the hourly rates